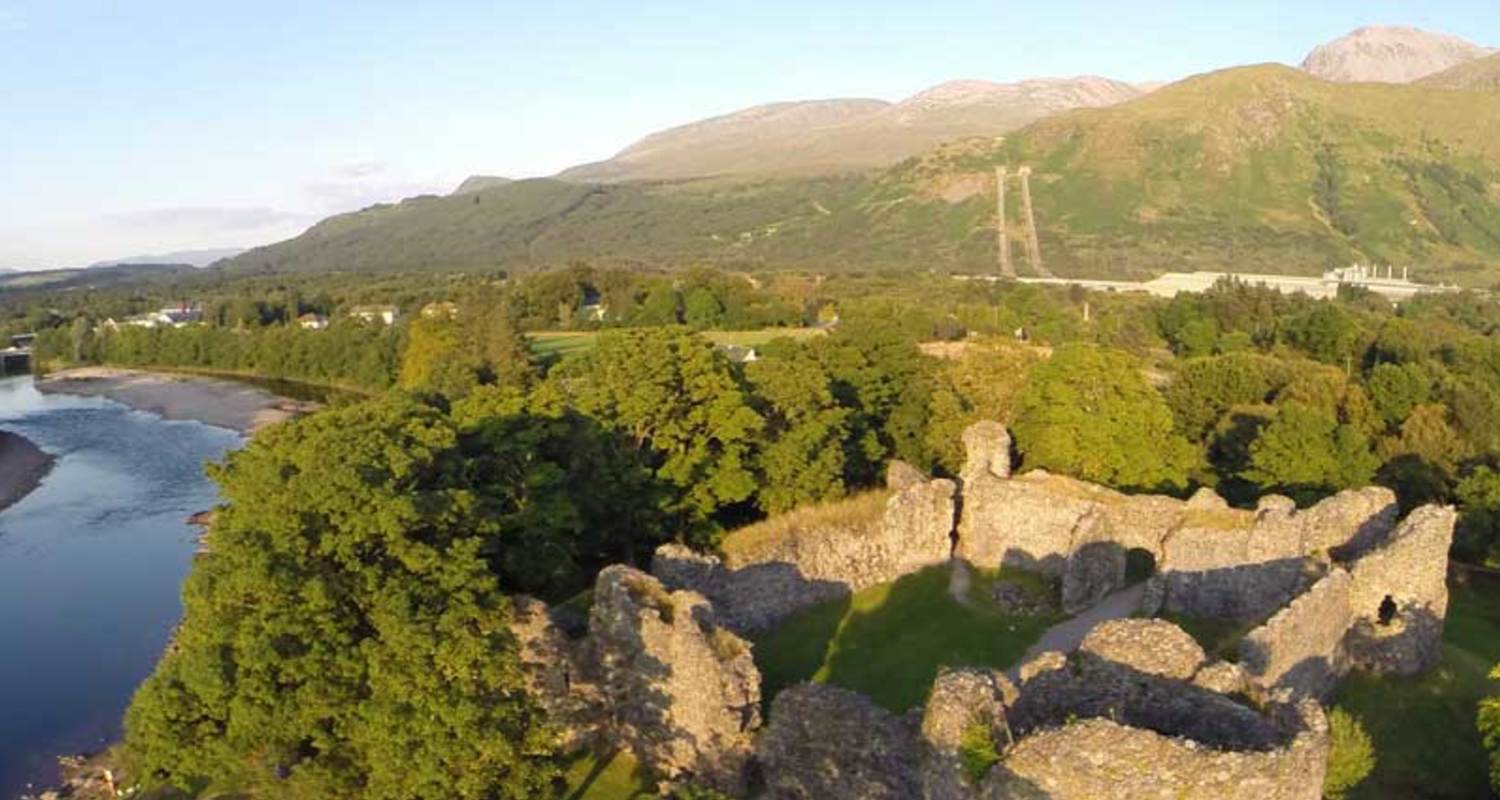 Old Inverlochy Castle sits by the bank of the River Lochy in Fort William and has been the scene of many battles for ownership over the centuries.

The original Inverlochy Castle was built about 1280 is still a fine sight despite witnessing many scenes of splendour and carnage - standing in the grassy quadrangle beneath the 30 feet high and 10 feet thick let your imagination wander! It was probably built by the Comyn family at the command of Longshanks (Edward I), who appreciated the strategic site at the head of Loch Linnhe beside the River Lochy.

There was a large settlement here in pre-Christian times and Inverlochy was the site of the signing of a treaty in 790 between the ambassadors of Charlemagne, the French King and Achaius, King of the Picts. The Vikings may have attacked the original pictish fortification.

It was said to have been a regular haunt of merchants from Spain and France to buy Salmon and Herring. Two major battles were fought at Inverlochy.

The Battle of inverlochy 1431
In 1431 during the desperate struggle between the Lords of the Isles and the Royalists, Donald Balloch, 18 year old cousin of the then imprisoned Lord of the Isles led 600 clansmen up Loch Linnhe to attack the Royalists in the Castle. Simultaneously his uncle from Torcastle attacked from the North. 1000 men lay dead and the battle was commemorated in a famous pipe tune, the Pibroch of Donald Dubh.

The Battle of inverlochy 1645
In 1645 in Covenanting times, James Graham, Earl of Montrose, was on the Royalist side in the Civil Wars. With only 1500 man, and after a long forced march through the winter hills of Lochaber, he attacked the Duke of Argyll’s men in front of the Castle at dawn. Argyll had  retreated across the loch to Camasnagaul bay and witnessed, from a distance, the defeat of his men and the slaughter of 1500 of them. Those who fled were pursued by Montrose’s men and where caught (and killed ) a number of cairns were raised – one notably 6 miles off near Lundavra on the West Highland Way.

Today the crumbling walls have been repaired by Scotland’s Ancient Monuments Commission – though “renovations” started about 1894 when Lord Abinger, then owner of the Castle, had some battlements built atop of the wall facing the West Highland Railway – this  to impress Queen Victoria as she sped past in a train to Banavie! (One hopes she was looking out to the right side of the track).

There is a well-known painting of Inverlochy Castle by Horatia McCulloch - some of the local hoteliers have copies hanging in their properties and its been well published in books.

The second of February was a day to be a spectator at a safe distance from here.... The Battle of Inverlochy in 1645 began at first light when an army of 3,000 men led by Montrose, charged on the Covenanter Lowland occupants - discharging them from the castle and slaughtering them in the river... must have been an exciting day in Fort William - if not a bit cold !

Inverlochy Castle is possibly the oldest castle in Scotland where it is believed that in 790 AD King Achaius signed a treaty with Charlemagne. However this much earlier structure was destroyed by the Vikings after they took up sailing and developed raping and pillaging, but long before they got involved in salmon fish farming back home in Norway.

It's interesting how things move on... fish farming in Loch Linnhe by Fort William is an important employer in the area nowadays... wonder if there are any Vikings working for Marine Harvest...

Our Ambassador of Lochaber History, Dr Chris Robinson, is working on our history section which we look forward to publishing next month..