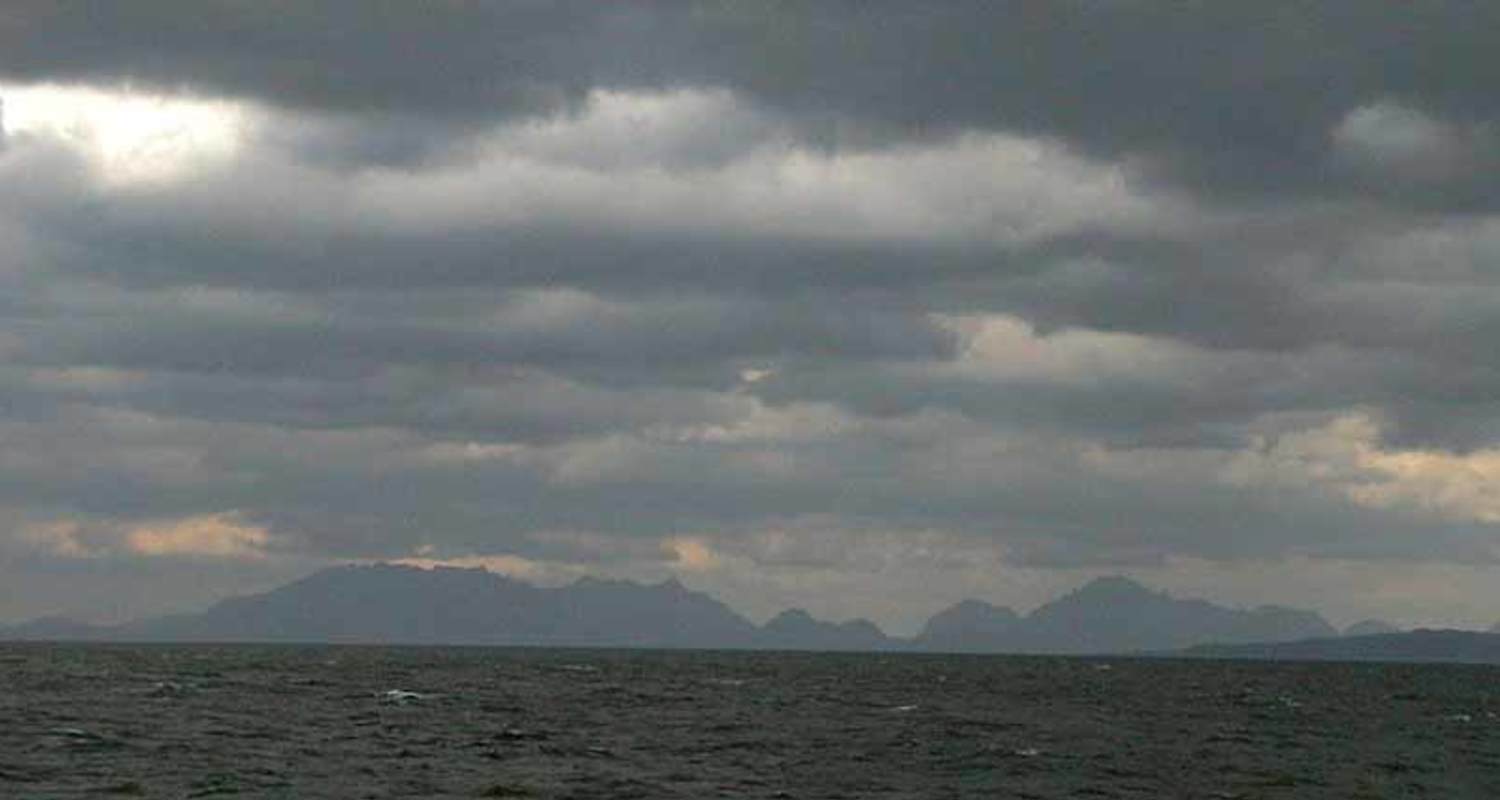 The Small Isles, or Inner Hebrides as they are also know, lie 10-15 miles off the west coast of Scotland from Mallaig and Arisaig.

The Small Isles of Rum, Eigg, Muck and Canna lie 5- 10 miles west of Arisaig. Unlike many groups each Island is distinct and different in geography, agronomy, population and ownership. From Muck in the South, through Eigg with its recognisable Sgurr, and Rum, mountainous and mysterious in the clouds, to Canna in the North, the Islands offer a wonderful variety of scenery, wildlife and lifestyle.

There are 2 options for getting to the Small Isles; by Caledonian MacBrayne ferries from Mallaig, or, in the summer months, on the Shearwater from Arisaig. They can all be visited for a day or longer.
Rum: Bought by the Nature Conservancy Council (now called Scottish Natural Heritage) in 1957, Rum is one of Scotland's finest National Nature Reserves. The island is a haven for a variety of birds and animals including recently reintroduced,sea eagles, deer, goats, otters, seals and many others. The mountains of Rum, enjoy fantastic Norse names - Askival, Hallival, Trollaval, Orval – and lend an air of mystery to an island that was known as the Forbidden Island. These mountains are the remains of a huge, ancient volcano and attract geologists from all over the world.
Also legendary on Rum is the magnificent Kinloch Castle, built by the Bullough family. Made entirely of Red Sandstone from Annan. the luxurious castle with its ballroom, elaborate Great Hall and, for the time, unique and complicated showers, proved a wonderfully secluded venue for private parties with a glittering guest list.
There is a well stocked shop in the village. Owned and run by the community, it has limited opening hours but is always open in the evenings after 5pm. Apart from groceries it also sells local crafts, postcards, stamps and souvenirs.

Muck:  The smallest of the Small Isles group and the most fertile, Muck has a population of around 35 people mainly living round the tiny harbour of Port Mor. It has been owned by the same family - the MacEwens - for over 100 years. Climb Beinn Airein (451 feet) and see the island laid out around you. Below is Camus Mor, a Site of Special Scientific Interest (SSSI). Enjoy the superb views across to neighbouring islands and mainland.
Walk and picnic, identify the vast range of sea and land birds and wild flowers, have a barbecue, go fishing or swim from the safe sandy beaches. The Muck open day is held in June each year and includes farm tours, island walks and other activities. Everybody is welcome to this enjoyable day.
Eigg : Approximately 5 miles by 3, the island has an astonishing variety of habitats for its size. These support an abundance of wildlife. Form the astonishing array of seabirds which welcome you from the ferry, the otter hunts and plays around the sandy bays. Orchid-rich grasslands and rich meadows shelter the elusive corncrake.  The island was bought by its community in 1997 and a significant amount of careful development has gone on since then. There’s an array of accommodation and for those staying on the island, the post office and shop can supply most of your needs.

Canna is the most westerly of the four Small Isles and covers 3000 acres. Previously owned by John Lorne Campbell, it was given to the National Trust for Scotland in 1981, in whose care it resides today.  A bird sanctuary since 1938, Canna is also renowned for its links to the Neolithic and Viking eras.  The Harbour View Tearoom and craft shop opens March – October.