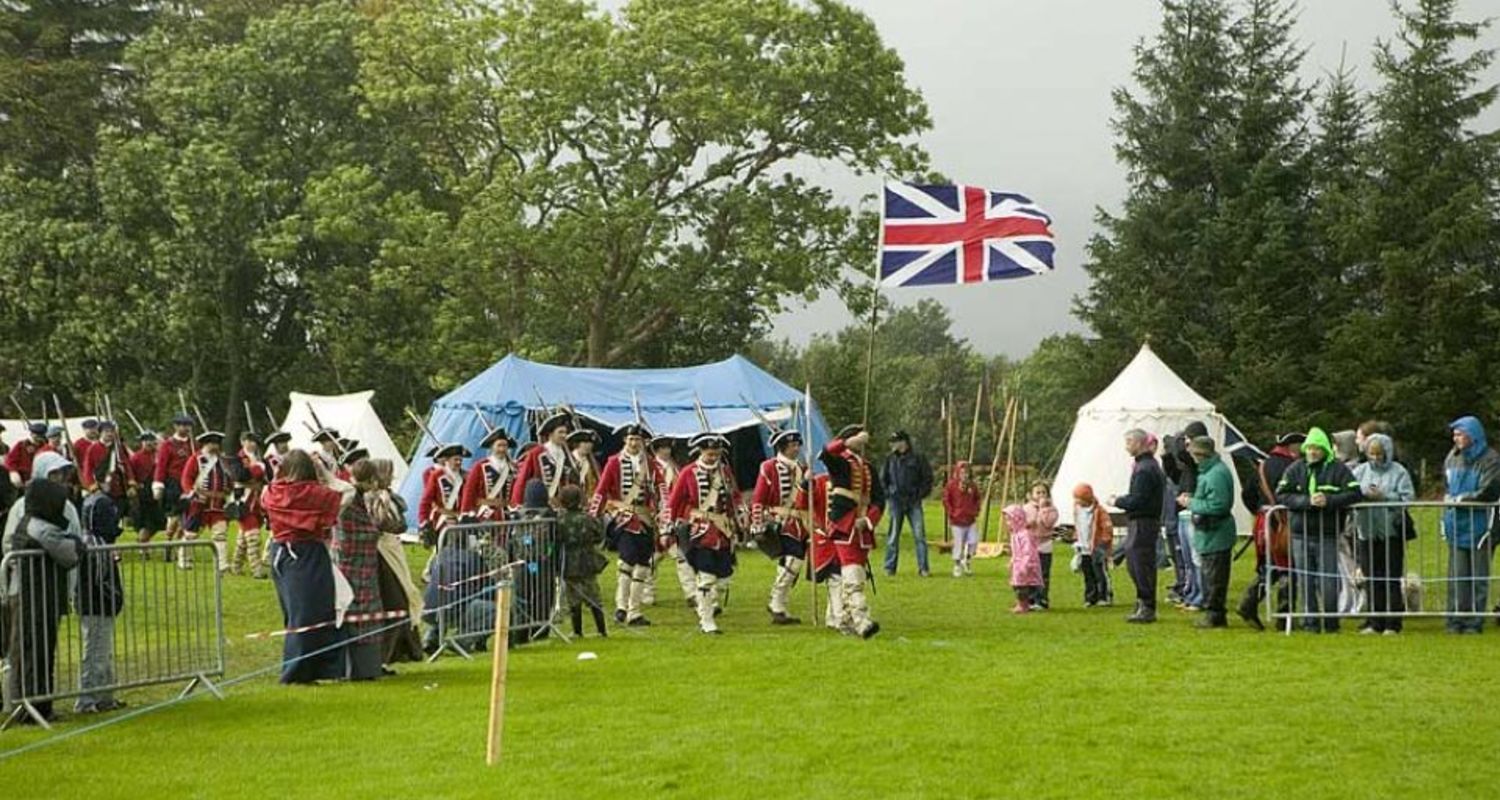 Battles of Inverlochy   1431 & 1645
The original defensive site at Inverlochy was probably sacked by the Vikings but the construction of a substantial Inverlochy Castle about 1280 signified the strategic importance of the site which saw its fair share of bloodshed in medieval times.
The First Battle of Inverlochy in 1431 was during the desperate struggle between the Lords of the Isles and the Royalists. Donald Balloch, 18 year old cousin of the then imprisoned Lord of the Isles led 600 clansmen up Loch Linnhe to attack the Royalists in the Castle. Simultaneously his uncle from Torcastle attacked from the North. 1000 men lay dead and the battle was commemorated in a famous pipe tune, the Pibroch of Donald Dubh.
The Second Battle of Inverlochy was in 1645 during Covenanting times, James Graham, Earl of Montrose, was on the Royalist side in the Civil Wars. With only 1500 men, and after a long forced march through the winter hills of Lochaber, he attacked the Duke of Argyll’s much larger army in front of the Castle at dawn. Argyll had retreated across the loch to Camasnagaul bay and witnessed, from a distance, the defeat of his men and the slaughter of 1500.
The Battle was witnessed by the local bard Iain Lom who overlooked the battlefield from a hillock just south west of the Castle. He wrote of the battle, in his native gaelic, a long poem which in part translates as:
The Day of Inverlochy
'Twas the Sabbath that rose, 'twas the Feast of St. Bride,
When the rush of the clans shook Ben Nevis's side;
I, the bard of their battles, ascended the height
O'er dark Inverlochy that shadow'd the fight,
And I saw the Clan Donald resistless in might.
Those who fled were pursued by Montrose’s men and further skirmishes took place. The spot where the MacDonalds gave up the chase is marked to this day by a Cairn 6 miles off near Lundavra on the West Highland Way. This Cairn was commemorated locally with a tradition that every MacDonald passing by would add a stone to the Cairn, whilst every Campbell would remove one. The Cairn briefly disappeared altogether when a local Campbell took away more stones than the one allotted to him by tradition. With the advent of the West Highland Way there was either a great surfeit of MacDonald’s – as at one time the cairn was of such size as to threaten the pathway. It is now well signposted and a little more modest!
See http://www.clan-cameron.org/battles/1645.html for more detai.
The Siege of Fort William   20th March - 3rd April 1746
During the Jacobite uprising of 1745 Bonnie Prince Charlie at the start of his march South initially avoided the Fort of Fort William but in early March of 1746 a decision was made to take the Fort.
Fort Augustus had already fallen to the rebels, but meanwhile Campbell militia on behalf of the Government were burning and pillaging. The attack on the Fort may have been seen as retribution – the Fort was under the command of Major General Campbell.

Siege Cannon were obtained from Fort Augustus  and the Fort bombarded, initially from the “Sugar Loaf” on the Cow hill – now clearly visible with a large Saltire painted on it. The distance to the Fort was too far however (as evidenced by Cannon Balls found beside Belford Road when Inverlochy Place was built last century). They then moved their cannon to the Craigs Burial Ground, but the Fort was easily supplied by sea and the jacobites inflicted only limited damage – and an early morning sortie by the Government troops captured some of their cannon and effectively put an end to the siege after two weeks.